Providing our clients with a variety of services, the knowledge, and skill to make positive decisions and changes in their lives

People can change, but first they must have to know how to change. Many troubled youth do not have a positive role model in their lives to help them know how to act responsibly or how to change. Through Straight Talk – Sound Direction individual mentoring, My Brother’s Keeper helped individuals to deal with the hardships in their life by helping them learn to live with Integrity, Respect, and Standards. During the mentoring sessions a connection, an atmosphere of trust, was developed with each client. An understanding of the client’s problems was developed and a game plan to address the problems was jointly prepared. Clients were told what they NEEDED TO hear, not just what they WANTED TO hear. Through a series of individual mentoring sessions the clients’ progress was tracked and clients were provided with the knowledge and skill to make positive decisions and changes in their lives.

In our lives, most of us have had one individual, a teacher, a coach, a family member, who has been our guide, our trusted model who has positively influenced our life. Harry has helped us understand how to face and solve our problems, he taught us personal accountability and respect for others. Harry helped us understand how to control our lives and become productive citizens. He has changed our lives and helped make us who we are today.

My Brother’s Keeper founder Harry Sydney is available for following services at your school: 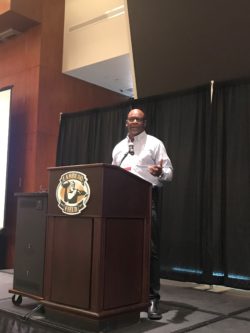 To date Harry has touched the lives of many people with his faith and courageous story of how he pursued his dream to become a professional football player despite adversity. He is dedicated to seeing people become unstoppable through his speaking engagements, mentoring program, and publication of his life story.

Harry has a degree in Juvenile Justice and Criminology from the University of Kansas; he and his wife have a blended family of eight children and 7 grandchildren.

His last season as a player in 1992 was here with the Green Bay Packers.

Harry Sydney is “the only one” as an NFL fullback to catch a touchdown pass from Joe Montana and Brett Favre.

When Harry retired from the National Football League he founded a non-profit organization My Brother’s Keeper – Straight Talk~Sound Direction a male mentoring program in Green Bay, WI   Since 2003 he has dedicated himself to helping thousands of boys and men find success in dealing with the hardships in their lives. The mentors in the program help boys and men gain the knowledge and skills to make positive changes by redirecting their thought process.

Published Author 2019 “Win From Within” takes readers on a journey across the U.S. and Canada, from an abusive and alcoholic home to locker rooms filled with world champions; chasing his dream, developing his story, defying all odds and overcoming disappointments. Packed with insight, wisdom, and practical application, readers will witness the dedication and determination it takes to dig deep, walk with integrity, never quit and “Win From Within”. (Available on Amazon)

Along with operating a male mentoring program for men, he co-hosts a successful sports talk radio show “The Fan” 107.5 FM and 1400 AM.